You can use Elements to train users on new processes and easily get acknowledgment records on any new content. To do that, you need the Enterprise Space license.

TIP Check this article to learn how to set up process trainees before you request an acknowledgment task.

First, you would need to make any diagrams “Ready to be published” (we strongly advise you to leave a comment on why the process is being published / what is different in the comment section because it will be displayed during training). 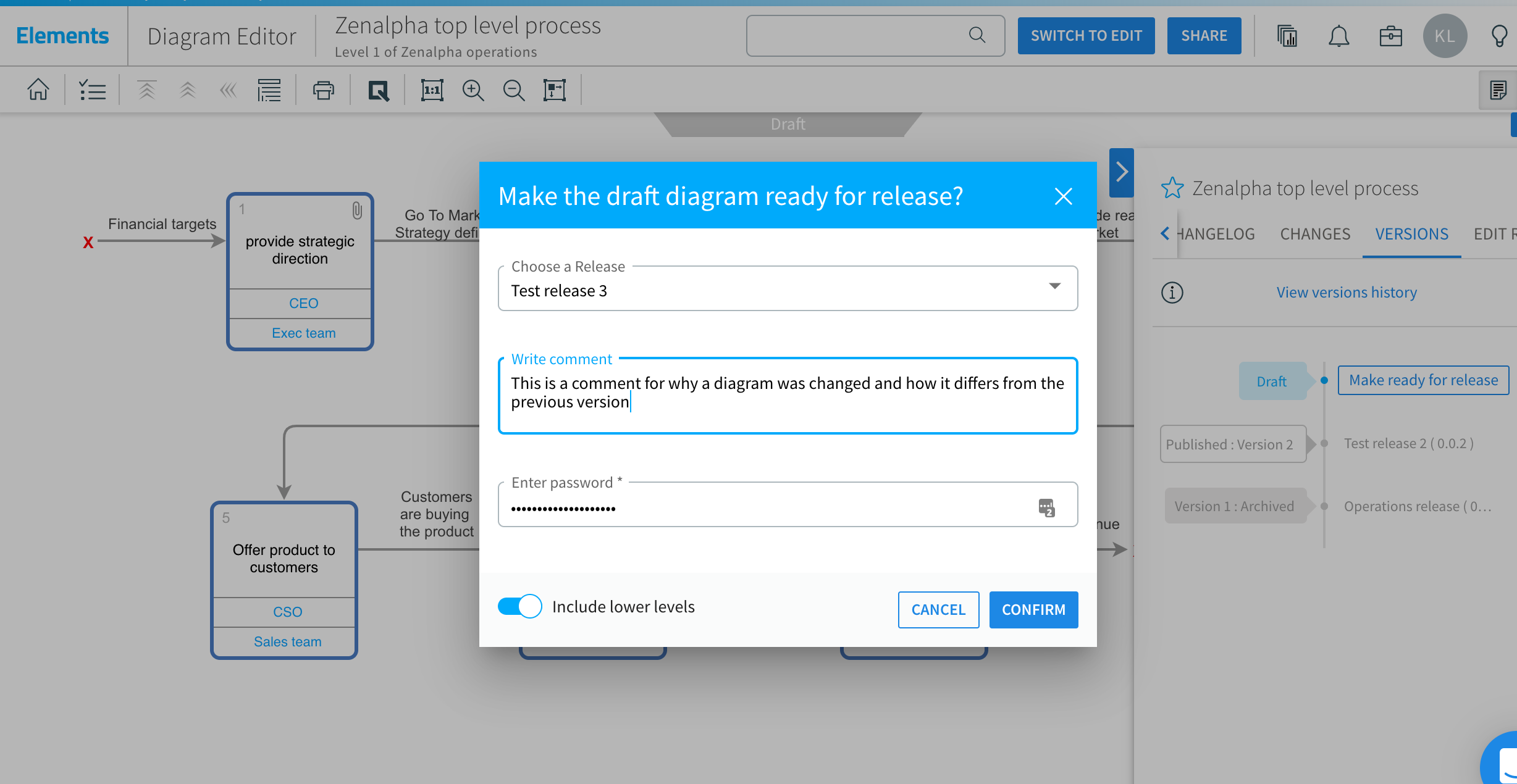 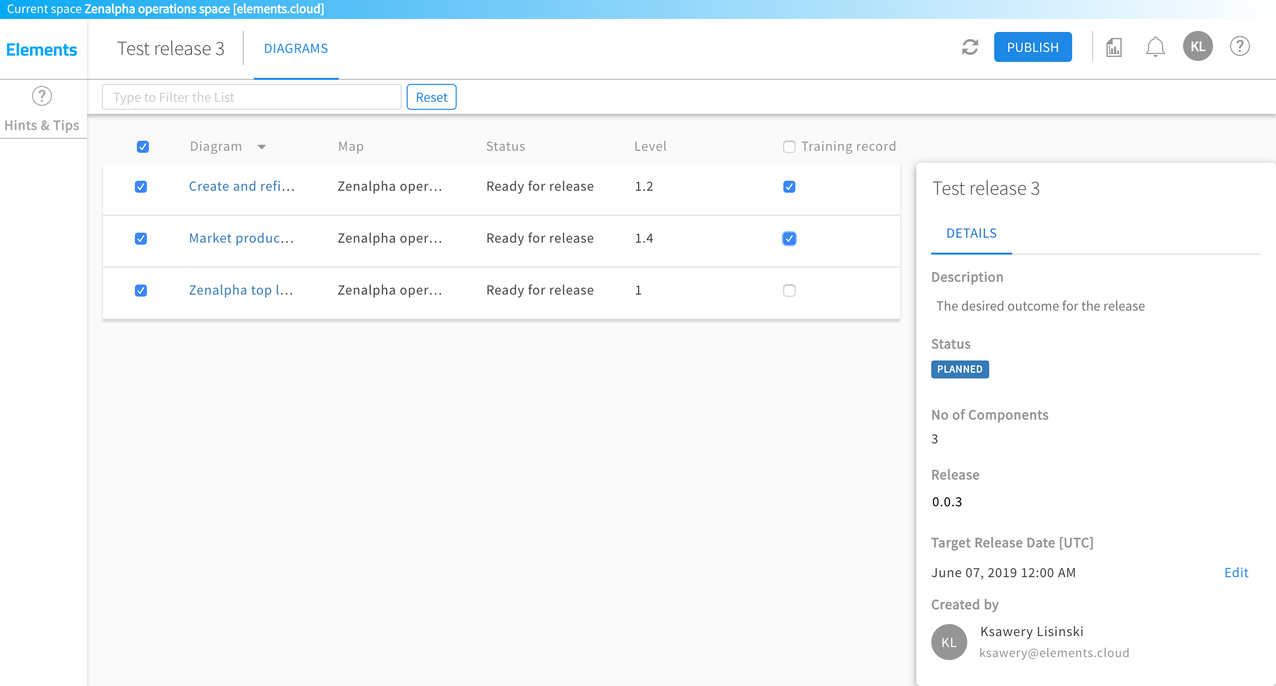 Diagrams that were already submitted to this release are selected in the first column, and you can also decide whether you need an acknowledgment on any of them as well. You might do that simply because some diagrams published in that release have significant changes, while others might just contain minor corrections that do not require such acknowledgment.

When you are ready, click “Publish” and also check the checkbox for the training request. You just need to select the due date and click confirm. (This operation requires a release manager permission in a space.) 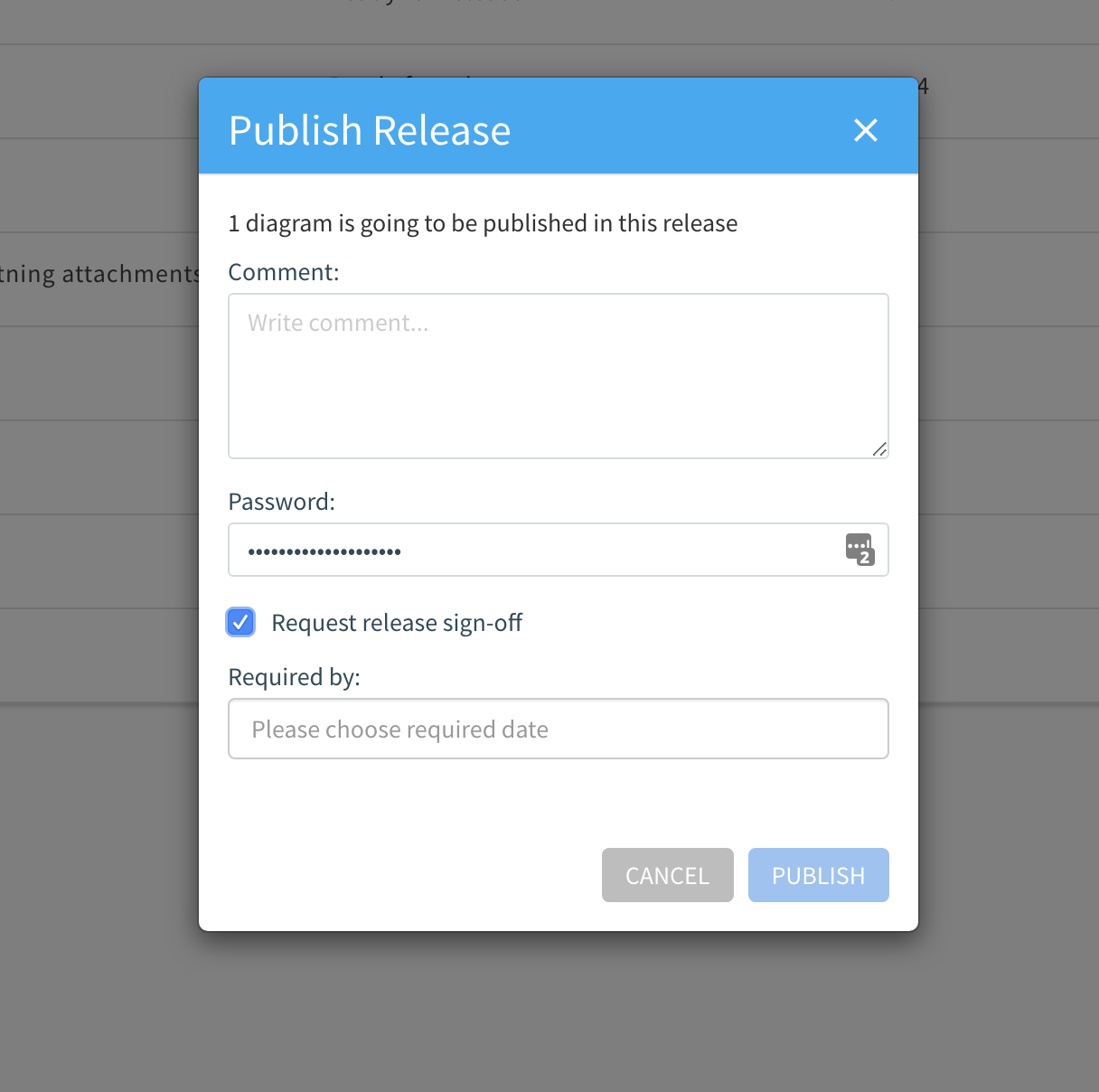 A single release training task, which you now own, contains multiple and unique user training tasks, as based on group membership and group to diagram association each user may have a different set of diagrams to acknowledge. Each user receives just one release training task that contains all content that they are associated with that was just published and requested for acknowledgment. As a release manager or task owner, you can check the progress of the overall release training task down to each user's progress from the “Published” release list, or you can go to the task list if you are that task's owner (click on the suitcase icon in the top right corner of the screen) to see the same data: 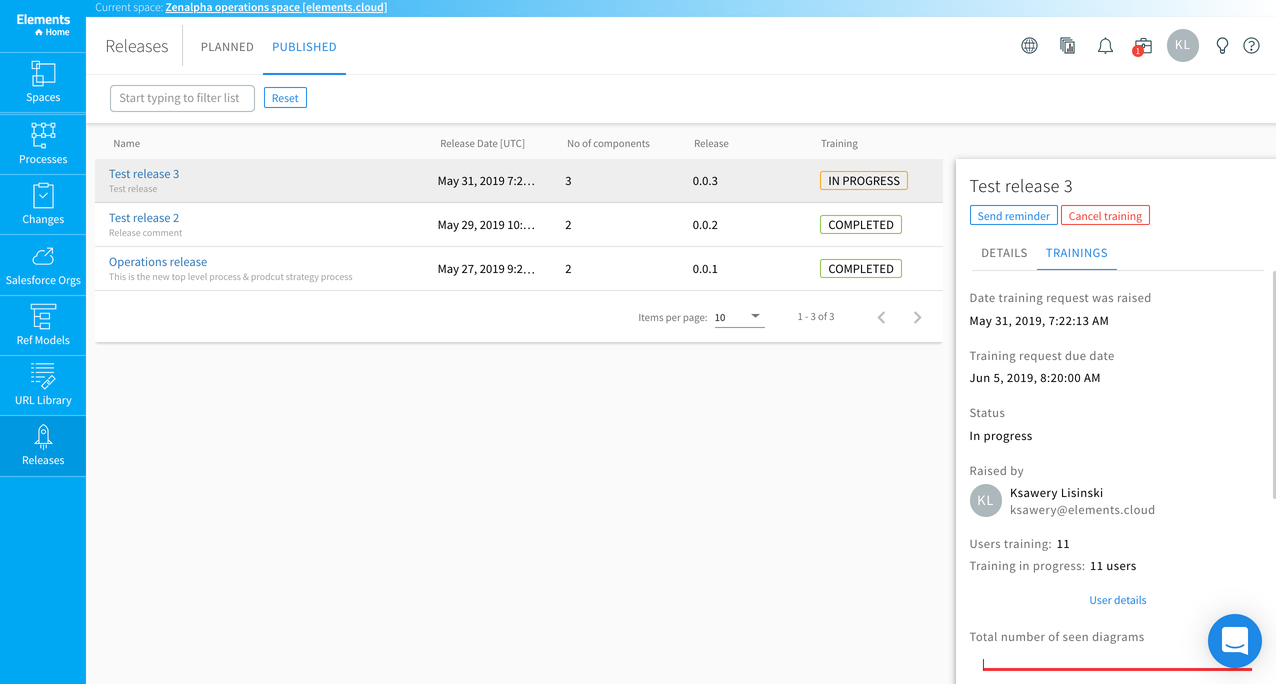 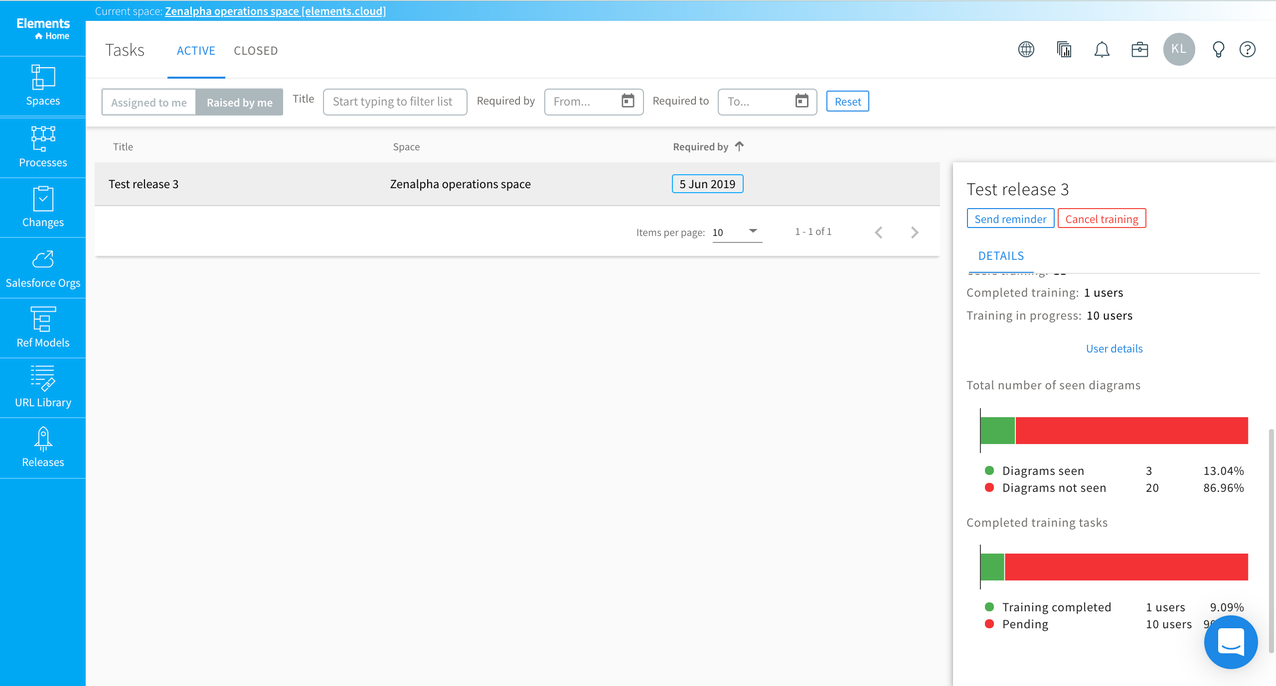 In the right sidebar for the selected release or training task, you will see 2 statistics: "Number of seen diagrams" and "Number of completed training tasks". The former tells you how many diagrams (counted as total for all users) have been seen and marked as understood by users; the latter tells you how many users have completed their whole training tasks. You can click on the user details text button to get a specific list of users with their progress status: 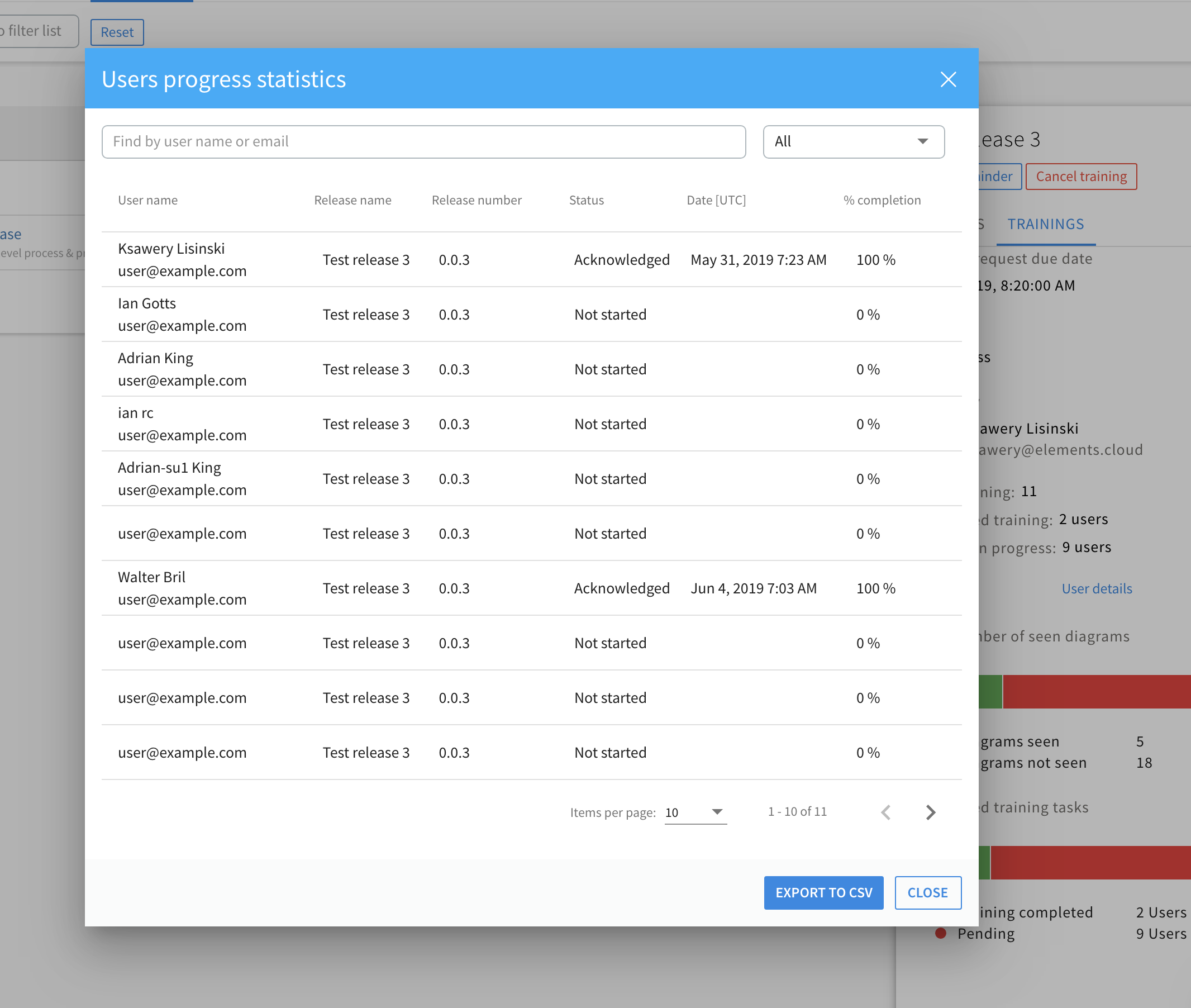 You can cancel the training task at any point. If some users have already managed to complete their personal training, the release task will be marked as completed, but all remaining users will have their personal tasks cancelled. You can also send users reminders and change the due date while doing so (click on the "Send reminder" button in the right sidebar).

Even though you are releasing different diagram versions in each release, the training logic always redirects the users to acknowledge the most up-to-date content. This was implemented to save users' time by not forcing them to acknowledge content that may be out of date and to support process patching. Example:

Technically speaking, the diagrams released in a patch are now the current ones, while the previous diagrams from the major release are now archived. Because through release training users are asked to acknowledge a set of processes and not particular versions of these processes, when you request the training on release 1.0 the users will be asked to acknowledge the updated diagrams released in a patch.

Let's imagine that we just had 2 releases:

The level 1 process is part of both releases, and release manager requests training on both releases. Rather than having to acknowledge the same process twice, as part of 2 different training tasks, users can only do it once. The system automatically detects that a given process is part of multiple tasks simultaneously, and by acknowledging it once in one task it is automatically acknowledged in the scope of other tasks.